What I'm Listening To...
Learn more about WXPR hosts and the music they've been listening to recently.

What Jeff Pennuci is listening to

Hi, I’m Jeff Pennucci. I am one of the hosts for The Edge on WXPR, which airs late on Saturday nights. This show plays heavy metal and hard rock music. I love that WXPR has something to offer for everyone and I love that I help to make that happen! I also love how much WXPR is a part of this community.

There are so many great bands that are releasing albums this year. Here’s what I’m listening to right now: 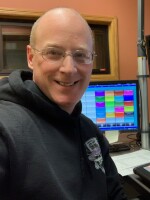