Remembering Missing and Murdered Indigenous Women Through a Skirt

In March, Misty Jacksonfrom the Bad River Band of Lake Superior Chippewa Indiansparticipated in a fashion show with the goal of highlighting the problem of missing and murdered indigenous women.

Beth Tornes continues our We Live Up Here series with the story.

When Misty Jackson walked down the runway at the fashion show in Billings, Montana, the audience was surprised and moved by her creation.  Jackson wore a full-length silver and red ribbon skirt imprinted with red hands. Written on the hands were the names of 16 missing and murdered indigenous women from throughout North America. The skirt won Third Place in the Most Creative Category.

Jackson, a Bad River tribal member, was invited to enter the show with the Lac Courte Oreilles Community College, where she’s majoring in Science and Native American Studies.  The fashion show was sponsored by the American Indian Higher Education Consortium, or AIHEC, at its Annual Conference.  One of the categories in the AIHEC fashion show was Missing and Murdered Indigenous Women.

“So I decided to enter in the fashion show something that was outside of my usual boundaries of comfort, my comfort zones, but I decided to do that, to enter that as a piece.”

The skirt is a double-layered ribbon skirt, with an inside and outside. The outside layer of the skirt is red satin, with shiny silver, black and white ribbons sewn onto it.

“And what we did is we put 16 handprints onto the skirt. So the handprints were done, they were painted on—they were actually my hands. Then in each hand print we put the name of a missing or murdered indigenous woman. The inside of the skirt is made of silver material, and to honor my family here, my Ojibwe Anishinaabe family here in Wisconsin, I used the totems or the animals that are from my family’s clans. So my mother is bear clan, so I used a bear, and then my father’s eagle clan, so I used an eagle. And because I’ve been adopted into a family in Crow Agency, they’re actually horse and buffalo people, they’re Plains people, so for them I actually put on a horse and buffalo as well.”

The missing and murdered indigenous women movement, or MMIW, began in Canada and has spread in the US.  In reservation communities and nearby towns, murder rates are up to ten times higher than the national average for all races. Jackson wanted to raise awareness about MMIW cases, which do not get the same media attention as other crimes.  They may not be handled as thoroughly or as urgently, are often underreported, and too often go unsolved.

“On the reservations, we do have different levels of poverty still, we have issues with drugs, with crime rings, things like that, because of the drugs that have come in. So there’s a lot of issues because of that, I think. If somebody on a reservation goes missing, a man, a woman or a child, it may not be as focused on by the federal police, or the police. They might not take it as seriously, and they might not consider them a missing person as soon as they would a person outside the community... They’ve realized this is a real and active issue, and we need to address it. We need to put resources towards it. We need to come together as a community to be able to make sure stuff like this doesn’t happen.”

In designing and making the skirt, Jackson had help from her mother, Christine Doud of Lac du Flambeau, and her adoptive mother Jackie Yellowtail, from Crow Agency in Montana, where she spent several years after retiring from the Army.  They worked over 32 hours putting the skirt together. At the same time, Jackson researched the missing and murdered Native women that she had included on the skirt.

“I used Facebook to request the names of women because I knew some, but I was wanting to get more. I decided on the number sixteen, there were four panels on the outside of the skirt and I decided to put four names on each of them.”

To honor these women, she also put together a slide show presentation about them, their children, which tribe they were from, and the dates they went missing and eventually found murdered.

She says there are definitely things we can do to help prevent these acts of violence.

Jackson says leadership skills she gained during her 15 years in the Army motivated her to speak out about this, and other important issues.

“I’ve been told as a military veteran that I have a voice, and that I need to speak for all. And if the need arises, then to do so. So this type of thing with the community, it may not get a lot of press normally, this is just something that I think is important to bring attention to. So in terms of having done the skirt for the fashion show, I’m seeing the ripple effects of it. I’ve heard people come up to me and say, wow that’s really beautiful, and there’s a lot of feelings, too.”

Misty Jackson has shown her skirt at an Art Show with LCO Community College, and will display it at an upcoming art show for MMIWs in Milwaukee.  The skirt will reach an international audience when she wears it at a formal event commemorating the 75th anniversary of D-Day in Normandy this June.  No doubt, the ripple effects of Misty Jackson’s skirt will continue, and her voice will be heard well into the future.

Beth Tornes is a poet and freelance writer living in Lac du Flambeau. This story was written by Beth Tornes and produced for radio by Mackenzie Martin.

The song featured in the story is “Thinking of You” by Breanna & Kylee OldElk, Apsaalooke, Crow Tribal Members, from Lodge Grass, Montana, and is used with permission. It was the song Misty Jackson walked down the runway to. 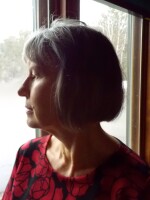