A few years ago I found myself stranded halfway up a mountain in Taiwan. I blame climate change. Well, actually, I blame my interest in what climate change means for the world’s lakes.

When I started my career in science 30-some years ago, the concentration of carbon dioxide in the atmosphere was about 360 parts per million and increasing.  Last year it passed the 400 mark and it shows no signs of slowing down.  We know that increasing carbon dioxide is causing the climate to warm, and oceans to acidify, but what is it doing to lakes? Answering questions like that is part of my job, but when I joined other scientists at the UW Trout Lake Station and around the world to start looking at carbon dioxide, or CO2, in lakes, it led to some surprises and an unexpected adventure.

But the story gets even more complicated and more interesting.  During the winter and summer, carbon dioxide accumulates in the bottom waters, the deepest parts of lakes.  But the water in lakes gets mixed every so often, like when there’s a seasonal change. In the spring, just after ice out, and again in the fall, just before ice on, the carbon dioxide comes from the bottom of the lake to the surface. And like a person breathing out, the lakes puff carbon dioxide to the atmosphere.  Our lakes in the Northwoods are kind of like vents in the landscape that open each spring and fall, allowing CO2 to move from the landscape back to the atmosphere.  Who knew?  This degassing turns out to be important as we try to understand how much carbon is sequestered in the landscape, versus being vented back into the atmosphere.

But there are some lakes in certain climates that mix more often.  Do they also puff out CO2? Asking that question is what got me stranded halfway up a mountain in Taiwan.

You see, I have colleagues in Taiwan that study a small lake high in the mountains that gets hit by typhoons several times a year. Unlike our typical Wisconsin lakes that mix only twice a year in the spring and fall, we thought the Taiwan lake, whose name translates roughly to Mandarin Duck lake, would mix anytime the extreme wind and rain of a typhoon passed over. It was a chance to study how such periodic mixing affected lakes, and whether Mandarin Duck lake puffed out CO2 each time it was mixed.

Along with several scientists from Wisconsin and California, my Taiwanese colleagues and I decided to record what happened before, during, and after typhoons.

We set out on a long 24-hour trip from the Northwoods only to learn when we landed in Taiwan that a typhoon was already looming.  But I hadn’t endured that flight to put off what we’d come for. Besides, we had just received some new research equipment that I was eager to set up on the lake. I was bound and determined to get this gear up the mountain, sure we could drive up the winding, gravel road, set out the equipment, and make it back down safely before the storm hit.  If things went well it would take only 5 or 6 hours. What could go wrong?

Over the mild objections of my Taiwanese colleagues, up the mountain we charged. Oops.  The typhoon hit early. In fact, we were still out on the lake in a little inflatable row boat as it grew to full force.  The rain pounded down, the wind blew, and lake level rose several feet.  Remarkably we were able to install the sensors and equipment despite the raging typhoon.  We were so focused on getting equipment set up that our first clue that we might be in trouble came when what should have been an easy half-mile walk up the trail from the lake to the car turned into a slog through knee to hip-deep water.

We congratulated ourselves when we made it back to the car, but alas, we found that our road, the only road off the mountain, was blocked by landslides in four different places.  There we were: wet, cold, tired and stranded.  Fortunately we found shelter in a forestry worker’s rustic camp. With what passed for a roof over our heads, we waited out the storm and the road repair. It took three whole days, but eventually we made our way down the mountain, humbled and with a new found respect for the sheer force of a Taiwan typhoon.

Oh, and the experiment? Our measurements confirmed that the typhoon did cause the lake to mix, and that the mixing released carbon dioxide trapped in the bottom waters, much in the same way as mixing causes our Northwoods lakes to puff out CO2 in the spring and fall.

So as the ice comes off this spring, imagine our lakes exhaling plumes of CO2 and know you are witnessing one of nature’s hidden secrets. Me? I’ll remember the time we were stranded in the mountains of Taiwan. 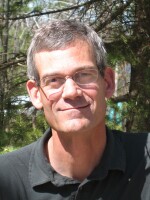 Tim Kratz
Tim Kratz is the Director of the University of Wisconsin-Madison’s Trout Lake Station. His research interests include understanding regional lake ecology and long-term ecological change. He was one of the founders of the Global Lake Ecological Observatory Network, a grassroots network of lake scientists around the world who use sensor technology to better understand lakes. He has lived in the Northwoods since 1981 and enjoys biking and cross-country skiing.
See stories by Tim Kratz
Related Content