Have you ever seen a bee emerging from a hole in the ground in the spring? There are many ground nesting bee species in Wisconsin and for this month's Field Notes, Gretchen Gerrish tells us more.

Bees – hundreds of bees!  That was the scene in our yard early this spring as the ground thawed and temperatures became bearable for the kids to begin venturing outside barefoot. We moved into our Northwoods home late last June and missed all the early signs and occurrences of spring. Having previously only lived in urban areas with manicured lawns or on farms with highly organic and treated soils, I had not encountered ground bees in my landscapes. Many ground bee species are native to Wisconsin and essential pollinators for trees and shrubs. They have very specific habitat requirements but can be found in high densities when the conditions are right.

Out of 20,000 bee species, 70% nest in the ground. Miner bees and cellophane bees are two of the more common species we encounter nesting in aggregations in Northern Wisconsin. These ground-nesting bees prefer burrowing in dry sandy soils where there is sparse grass. You find them on sunny, south-facing slopes that dry out and warm up quickly in early spring. If conditions are right, 1,000s of bees build their nests in close proximity to one another. Females excavate the soil, creating a main tunnel and 5-10 side chambers where they will lay their eggs. From above, the burrows look like ant hills, but the opening is larger and it is common to see a fuzzy bee face peeking out of the hole.

These burrowing bee species do not form colonies and are non-aggressive. There is no hive mentality or aggressive defense of resources. Males have lost the ability to sting. And, while females can sting, they only do so if removed from the ground and handled extensively – as my curious 9-year old can attest. In contrast to the collaborative caste system of honeybees made up of workers, drones, and a female queen, these solitary species have similar numbers of males and females and they compete for mates, nest sites, and food resources.

Males, cued by ground surface temperatures and solar warming, are the first to pop out of the ground each spring. They emerge about a week before the females and each day, they rise into the air hours before the females become active to patrol the nesting aggregations. Chemical cues called pheromones play a big role in mate finding for ground nesting bees. Male bees can smell virgin females, even before they first emerge from the soil. Males will dig receptive female bees out of the soil just in time to reproduce. After mating, the pheromones produced by a female bee change and male bees no longer swarm to mate at her nest. This protects the female from unwanted activity and allows her to focus on completing her nest and stockpiling resources for her young.

Female ground-nesting bees are responsible for storing enough pollen and nectar to carry their offspring through 11 months of development and growth. They accumulate liquid or semi-solid ‘bee bread’ high in sugar, protein, and nutrients in small chambers off the main burrow. Cellophane bees, one type of ground bee, have a special trick to protect their developing young and keep liquid resources contained within their nests. They produce a plastic-like polymer. They have specialized mouths that look like paint brushes that help to spread layers of homemade ‘plastic’ all along the egg chamber wall. They mount a single egg just above their homemade Ziploc full of nutritious nectar soup. When the larvae emerges, it falls into the sugary soup where it grows and feeds throughout the summer and fall. The bee larvae reach a prepupae stage and have limited additional development throughout winter but are some of the earliest insects we observe each spring.

No evidence remains of the hundreds of swarming bees that filled our lawn in April and early May. Their burrow openings are gone but we know that the next generation is growing just inches below our feet. Next spring, we will know that their emergence means the forest flowers are starting to bloom and warm temperatures are on the way. 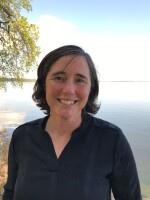 Gretchen Gerrish
Gretchen Gerrish works for UW-Madison's Trout Lake Station through the Center for Limnology. She studies how evolutionary and ecological processes interact to allow natural systems to deal with change over time.
See stories by Gretchen Gerrish