Many artists have a muse, something that is a huge source of creative inspiration for them. Peg Sandin is an artist based in Ironwood, MI, and her muse is Lake Superior.

Lake Superior welcomes many visitors to its shores. Some are captivated by the unpredictable vastness of water that stretches to the horizon, while others are enamored with its soaring cliffs and spectacular waterfalls. Still others find solitude in sifting through rocks along the beach, searching, often in vain, for that elusive agate. For the past 40 years, Peg Sandin, a watercolor artist, has been capturing this beauty at Little Girl’s Point in Ironwood Township on the western tip of Michigan’s Upper Peninsula.

Before Sandin began capturing the beauty of Lake Superior, however, she was first taught a different art form, music. As a young child, Sandin was given piano lessons from her grandmother.  Throughout high school, Sandin played the violin. In college, she studied music and music education. During this time, she didn’t take any art courses.

It was after college, in 1972, while Sandin was teaching music in Sun Prairie, Wisconsin, she attended a watercolor exhibit at the Madison Art Center. Sandin was specifically captivated by the work of one watercolor artist, Lee Weiss.

"She had all these absolutely magical paintings," says Sandin. "And I thought I would like to know how to do that. So then I started taking art courses.”

Sandin immersed herself in watercolor, taking courses and learning techniques from nationally renowned artists. The collection of these techniques contribute to what Sandin calls her “toolbox.” But one lesson in particular from Duluth, Minnesota watercolor artist Cheng-Khee Chee has had a lasting impact on each watercolor painting that Sandin creates.

Sandin describes his impact: “When I first took my class with Cheng-Khee Chee in Duluth, he talked about the Chinese painting and how they would paint and paint and paint the same subject, the very same painting until they got it perfect. So the things that I paint, I have observed for a long time before I try to paint them.”

It was during this time that Sandin, like many people who stroll the rocky beaches of Lake Superior, was drawn to the multi-colored rocks that illuminate and magnify with the clarity of the water. “I was walking at Little Girl’s Point and I looked down at the water patterns over the rocks and I thought, wow, that is really cool,” Sandin recalls. “So I took a photograph of that and that’s when I started painting rocks. It was probably in 1981. It’s been a while.”

It was years later, in 1996, that Sandin made the commitment to establish more permanent roots along the shores of Lake Superior. Sandin, however, had one caveat regarding her future plans.

“We had a small cabin on Lake Superior and got the brilliant idea to add on to it to make a home for ourselves," she says. "One of my big requirements was I wanted a nice, big studio, and I got it.”

Immersing herself in the beauty of the Lake Superior basin, Sandin’s subjects expanded from the rocks to also include the woods, wildflowers, and wildlife. More recently, however, Sandin’s interest and evolution as an artist is in the challenge of abstract art.

"Very often, people will say my paintings look like photographs," she reflects. "And I think the last couple years I’ve been painting, they don’t say that anymore because it’s something they have never seen because it’s just coming out of my imagination.”

For example, drawing heavily on her classical music background, Sandin created a series of three abstracts inspired by an aria sung by “Queen of the Night” in Mozart’s “The Magic Flute”. The setting is an outdoor Opera House in Santa Fe, NM.

“So I have a lot of night sky in this painting," she says. "And the Queen is singing a very, very high aria, so I have notes flying out of her mouth. It’s very abstract and very lively and very colorful”.

Peg wrote the English translation of the aria on the middle of the three paintings:

The Vengeance of Hell boils in my heart, Death and Despair flame all around me! If Sarastro does not feel the pains of death through you, you are no longer my daughter. Be outcast, be abandoned forever, Let all the bonds of nature be dashed to pieces, if Sarastro does not perish by your hand! Hear gods of vengeance, hear a Mother’s vow! (She sinks to the ground)

Sandin is also aware that people who have supported her art for the past 40 years may have reservations regarding her new direction toward abstract art paintings.

“At some point, I should probably have a retrospective because I’ve been painting for so long that it would be interesting, I think for people in this area that have supported me to see my evolution,” Sandin explains. “I think if they just saw abstracts, they’d wonder what happened to me”.

Looking ahead, Sandin has a vision of what future watercolor paintings will capture.

"I’m hoping that my abstracts will start to include my love of Lake Superior," she says. "So if I can get the music, Lake Superior, the surroundings put in an abstract, I will be happy.”

Over the past several years, Sandin has committed herself to taking daily walks, while observing the ever-changing Lake Superior ecosystem. It is during this time that she may come up with great ideas, or reach resolutions to difficulties in her paintings.  Being an integral part of the landscape herself, Sandin shares with us the beauty of Lake Superior.

Her grandmother, who taught her the essence and beauty of music, also taught her a lifelong lesson.

You can view the artwork of Peg Sandin at the Downtown Art Place and Z Place Gallery in Ironwood, Moondeer & Friends Gallery in Boulder Junction, or online here: http://pegsandin.net

Larry Lapachin covers all things Lake Superior for WXPR's We Live Up Here series. He's based in Rhinelander, WI, and Ironwood, MI. This story was written by Larry Lapachin and produced for radio by Mackenzie Martin. Some music for this story came from Podington Bear. 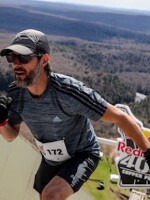