Seasonal Reflections: "Spummer" Is a Bummer

With the fall season officially upon us…many people may be experiencing some bittersweet feelings about the transition towards winter.  In today’s Wildlife Matters, DNR Wildlife Biologist Jeremy Holtz shares his reflections on the end of a relatively cool season…that he argues shouldn’t be considered a summer at all.

Well, here it is, my absolute favorite time of year – autumn. It has everything I am looking for in a time of year; warm days, cool nights, beautiful colors, and plenty of different opportunities for hunting. Yet I am not as happy to see fall here as I have been in years past. Why? I am not exactly sure, but I think it might be because I felt like I was robbed of spring and summer. Sure, we had some snow-free months, grass grew, trees leaved out, and birds sang, but spring felt like winter. Summer, well, summer didn’t really feel like anything to me. It was just a bit too cool to really enjoy some of my favorite summer activities, like swimming, snorkeling, scuba diving, and floating in tubes down the river. I guess if there was one word to describe summer this year, it would be MOSQUITOES.

So, I only launched my boat once. I never even got all my fishing poles set up for the summer and now it is time to put them away. My camping gear was in a state of semi-preparedness, but cool, cloudy, damp days don’t make me want to head out and set up the camper. I feel a bit robbed! A bit unfulfilled! I live in Wisconsin because I need four distinct seasons, and this year we had three—winter was followed by a half-spring, half-summer season this year – a spummer. Yes, that’t it! Fall has come at the end of spummer.

I hope you enjoyed your spummer. Thinking back on it, maybe it wasn’t all that bad. After all, I did get to take the boys camping at the Northern Highland American Legion State Forest, where I gave a naturalist talk about the furbearers of Wisconsin. I took them camping in Florence as well, an annual family event that included tubing down the Brule River where I caught a 17 ½ inch smallmouth bass. We also took the family out into the woods a couple times where we were able to satisfy our annual need to harvest blueberries.

Bear baiting took up a big portion of my spummer too. That was actually enjoyable, seeing what animals I caught on camera, trying to outsmart a pair of rotund raccoons, and the thrill of actually getting bears to open and consume my bait without using donuts or candy (more about that once bear season ends). Each of the boys accompanied me at least once, bear baiting, giving me a chance to get some treasured alone time with each of them.

We finally got our rain garden in this spummer, after three years of saying it would happen. This was the year to test it out, for certain. Our new plants did pretty well, in spite of being hammered by inches of torrential rain and being nibbled by neighborhood bunnies. It was a stormy spummer that brought down branches and flooded roads across the Northwoods, but it was a good year to grow green plants. I think it was good for insects, too—I saw more pollinating insects this year than I have seen in years prior.

I am glad fall is here. My favorite season rarely disappoints. Trees are already turning colors. The smell of curing ferns fills the air. You hear the faint calls of geese, so far and away you wonder if you actually heard them or simply imagined their voices on the wind. Deer are beginning to move around more as the bugs and daytime temperatures moderate. Start preparing for what’s ahead. Fall is all about nature preparing for winter. Live in the moment, take it for what it is, because winter will come and claim Wisconsin for its own soon enough. 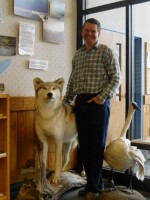